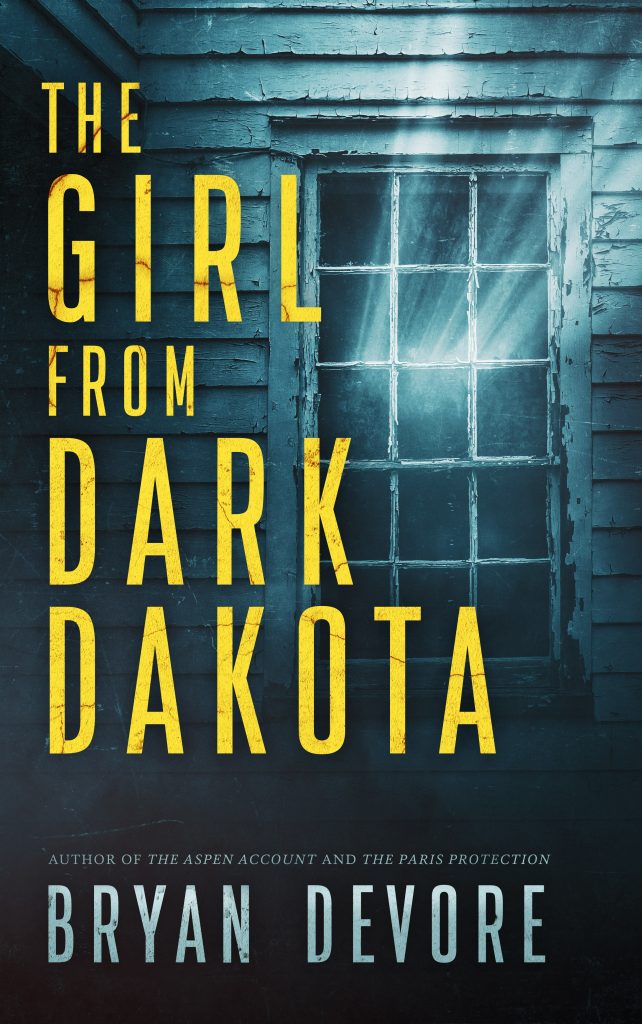 The Girl From Dark Dakota

“A masterpiece … plenty of thrills and chills.”

In Williston, North Dakota, nearly a year has passed since Annabel Heller’s murder last Halloween. Now four lives will be forever changed. High school senior Rachel Black hears Annabel’s ghost crying out in her dreams. Madam Bovell, a medium who sells fraudulent reading since losing her gift years ago, finds her abilities mysteriously returning—and guiding her to Rachel. Jason Hardy, an auditor up from Chicago, sees inexplicable things while working late in Williston’s old hospital wing. And Dr. Donovan Graves, bereaved father and renowned debunker of paranormal research, feels his son’s spirit urgently trying to reach him. Only five days before the next Halloween, time is running out for all four to uncover the secrets of a small town, and the lurking evil that threatens everyone in it.

“A masterpiece … plenty of thrills and chills.” –Pacific Book Review

“[A] spine-tingling paranormal thriller … wraps a ghost story around a whodunit … Fright fans who want their scares in the context of a believable story will find themselves engaged by both the scenes of terror and the rich human drama.” –BookLife Reviews

“With twists and scares aplenty, The Girl from Dark Dakota should easily win over fans of the genre.” –BlueInk Review

Researching THE GIRL FROM DARK DAKOTA

One night, on a business trip many years ago, I was working alone in a conference room inside an old hospital in North Dakota. It was dark and late, and I could hear it storming outside. Then suddenly things just didn’t feel right. You know that feeling you have when your hair stands up on the back of your neck and your body tenses as if your instincts are warning you of some unknown danger nearby? That’s what I felt. It was as if something unseen was now in the room with me. So I packed up my work and returned to my hotel for the night. The next morning, I mentioned this to the hospital employees, and that’s when they told me that before the renovation the conference room had been an emergency operating room. I was shocked. I had unknowingly been working in a room that used to be a theater of death. I wondered how many people had died in that room over the decades. I wondered if any of their spirits were still there. And I wondered if that was what I had felt the previous night. I tucked the experience away in the back of my mind. Then, over time, the memory merged with my imagination and began to grow into a ghost story.

There is a rich history of ghosts in literature. Homer used one in The Iliad. Shakespeare did, too, in Hamlet. Dickens used them prominently in A Christmas Carol. And then they got really scary with the advent of the modern ghost story, starting with writers like Edgar Allan Poe and Henry James, then Shirley Jackson, then Stephen King, with hundreds of other writers between Poe and King. I understood why so many writers had been drawn to stories about ghosts. The intriguing thing about ghosts is that they are us. They’re not some mythical monster or alien from outer space or some unholy demon from hell. Ghosts and spirits are what we will all eventually become, if we dare to believe in such things. And that is the real beauty and fascination within the terror. They are us. I was intrigued with the many themes that could be explored in a ghost story (especially about death), I was encouraged by the rich history of ghosts in literature, and I was curious from my own experience in the hospital. So I took the plunge. I decided to devote my efforts to writing the best ghost story that I could.

In my past thrillers, I’ve always done a lot of research to try to get the details right. I’ve researched corporate frauds, organized crime, the U.S. Secret Service, and the tunnel system beneath Paris. But how do you research something like ghosts? I wasn’t even sure if I believed in them. Ultimately, I decided I would read every book I could find about ghosts and spirits, including histories of hauntings, spiritualism, mediums, and scientific paranormal researchers—as well as the works of the great fiction writers of gothic and horror.

I started by reading the complete works of Edgar Allan Poe to get my mind in the right place (that is, a dark place). For me, Poe is one of the five greatest writers to ever live. After that I wanted to read something like a memoir that would help me understand the beliefs and experiences that real people have had when trying to contact the dead. I found an amazing book titled A History of Ghosts: The True Story of Séances, Mediums, Ghosts, and Ghostbusters by Peter H. Aykroyd (Dan Aykroyd’s father). The book not only gives a great history of spiritualism, but it also gives a touching and real-life portrayal of small-town home séances during the peak popularity of spiritualism in the mid-1800s through the early-1900s. I was hooked. There was a whole world of people out there trying to contact spirits of the dead, and if you read enough of their testimonials, you find yourself either believing them or wondering how so many people in different places in different years could be so good at conjuring up fascinating stories that they all attest are true.

After Aykroyd’s book, I read Ghost Hunters by Deborah Blum, a history of the Society for Psychical Research in London and the cool collection of professors in the late-1800s that performed countless investigations of hauntings, mediums, and séances that were all the rage back then. Then I read another great history book called Ghosts by Roger Clarke. I read others, too, but Aykroyd’s, Blum’s, and Clarke’s books were my favorites. I capped it off by reading The Encyclopedia of Ghosts and Spirits by Rosemary Ellen Guiley to make sure I hadn’t missed anything major in the vast history of ghost lore and the real-life people that lived it.

I then turned my focus back to the great works of literature involving ghosts and horror. I read the classics like Henry James’s The Turn of the Screw and Shirley Jackson’s The Haunting of Hill House. I read The Monkey’s Paw and Casting the Runes and The Woman in Black and many, many more. I especially loved The Best Ghost Stories of J.S. Le Fanu. I read the complete works of H.P. Lovecraft. And I reread Stephen King’s The Shining (probably the best ghost story of all time).

Of course, I wasn’t really trying to write horror; I was trying to write a mystery thriller that was also a ghost story. But this meant I needed to be scary at times. So I had to understand horror. In the end, I was very lucky to come across the last book I’ll mention: Stephen King’s Danse Macabre. What a gem! It’s not one of his novels or collection of stories. The book is Mr. King’s lessons and observations on “what makes horror horrifying and what makes terror terrifying.” In the late ’70s, King taught some creative writing and literature courses at the University of Maine while working on a new novel. Then, in 1981, he put this course material and other thoughts down in Danse Macabre for anyone to read and learn about the horror genre (books and films). It was a godsend for me. He talked about tons of things that were invaluable for anyone writing their first horror novel, and it really expanded on just how shockingly sophisticated good horror can be. It’s not just mindless slasher stuff. There is a real art to understanding what fears we have and then conveying them in fiction. And metaphors are encouraged. The Shining wasn’t really about ghosts in a secluded off-season hotel; it was about how alcoholism can destroy a marriage and a family. From this I learned that my ghost story must be about something bigger than just the obvious events that take place in it.

So I had to ask myself: What was my ghost story really about? The deeper theme had already been hiding in my story the whole time, under the surface. I just needed to flesh it out. Ultimately, The Girl from Dark Dakota is about “the fear of change.” This is a fear many of us have if our lives are good. It’s a fear many in society have if things they don’t understand and can’t control threaten to change their lives or even the communities that they live in. And this leads to a fear of the unknown, a fear that it will bring a future that is worse than the present. A fear of change … a fear of an uncertain, unknown future. Many of us have this fear from time to time. I know I do. If The Great Gatsby is about trying to recapture the past, then The Girl from Dark Dakota is about trying desperately to hold on to the present even as it’s starting to change. And maybe that’s what ghosts are … maybe that’s why some of them can’t move on. And maybe that’s why the fear of change can make some of us become trapped in a place, like ghosts, even while we’re still alive, just watching from the shadows as the world changes without us.

So that’s how I spent a lot of my free time over a four-year period. Reading about ghost lore and the history of hauntings, spiritualism, and paranormal research. And reading one ghost story or horror novel after another. And watching countless old and new horror films in between bouts of writing. I fully emersed myself into the genre, so for me it was a truly terrifying four years of living and breathing horror. Even now, as I’m finally finished with The Girl from Dark Dakota, I find it difficult to fully recover from the experience. You might say it haunts me still, and I can only hope that the book conveys enough thrills and chills and deeper meaning to haunt you, too.