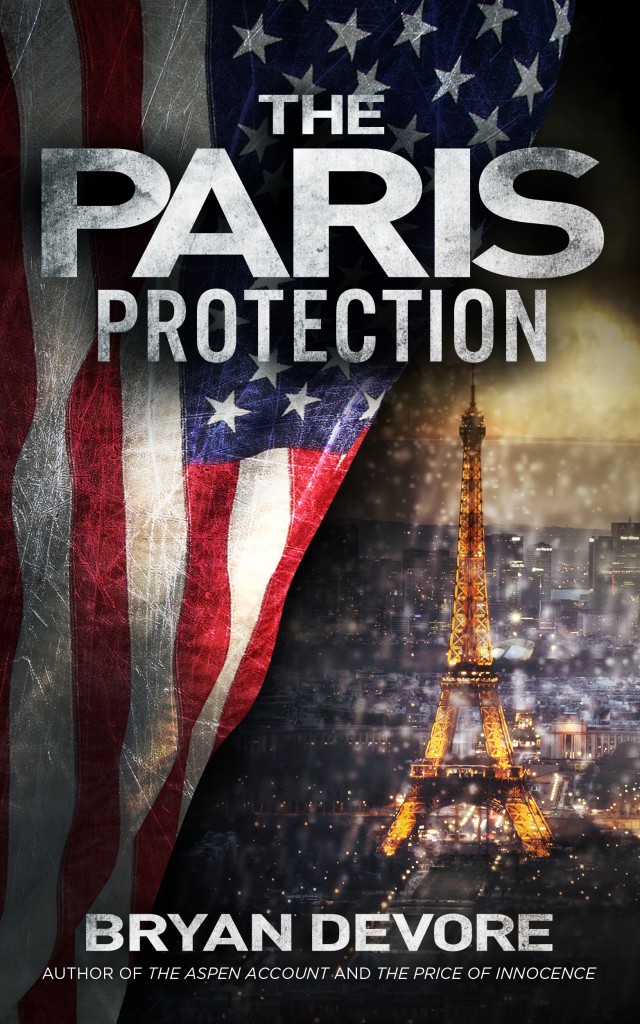 “Exhilarating…” “Nearly impossible to put down”

While President Abigail Clarke attends a summit in Paris, an unknown enemy makes a brazen attempt on her life, inflicting horrific losses on her protection detail. Plunged into a battle beyond anything they could have trained for, Secret Service Agents Rebecca Reid and David Stone must find a way to keep the president alive. The attackers have vast resources and would sacrifice everything for a devastating blow against America. The agents must be willing to do no less.

“Exhilarating…Devore is a superb writer who has clearly done his research into the inner workings of the Secret Service.” – BlueInk Review (Starred Review)

“Nearly impossible to put down. Thriller fans will find themselves on the edge of their seats as they experience Paris at breakneck speed…Most impressive are Devore’s female characters, especially Special Agent Rebecca Reid.” – ForeWord Clarion Review (5 Stars)

“Riveting…a modern day, action-packed thriller…fully engages readers with the sights and sounds of Paris…kudos to Devore for giving readers strong female characters in both the President and agent Rebecca Reid…keeps readers on high alert until the very end.” – Pacific Book Review (5 Stars)

“Devore has done his homework…a believable, action-packed roller coaster…readers just may lose fingernails over this one.” – San Francisco Book Review

“A gripping thriller…the ideal blend of action and story with plenty of well-researched details that keep the reader glued to the page…The Paris Protection is one of those books where you don’t know who will make it out alive and how it’s really going to end; a perfect example of the thriller genre.” – Manhattan Book Review

“Heart-pounding…a stimulating, action-packed account of the lengths the US Secret Service takes to protect the president…an outstanding piece of fiction.” – Readers’ Favorite (5 Stars)

For my third book, I wanted something patriotic, something closer to Washington D.C., the U.S. military, and the president of the United States. I didn’t start out wanting to write a thriller about terrorism, but I wanted something very fast-paced almost from the beginning of the story. Something where the nation was in danger. Perhaps a major assassination attempt against the president. And this, of course, turned my focus to the Secret Service.

Like most Americans, I’ve always been fascinated with the United States Secret Service. I’ve seen them portrayed in movies as professional and patriotic heroes. I was extremely insecure when starting the first draft because I knew nothing about the Secret Service other than what I had seen in movies. I had the same feeling when first writing about organized crime for The Price of Innocence. The remedy for understanding organized crime was to try to think of them as a real-life business with people and tasks that need to be planned and executed in a functioning way. So I would take the same approach with the Secret Service. I needed to forget what I’d seen in movies. I needed to think of them as an operating business. I would need to understand how they really function.

So how does the Secret Service really function? How do they recruit, train, assign personnel, coordinate tasks and shifts, what equipment do they really use, how does the management of agents and operations work at the low and high levels, how does the planning work, the advance teams, the CAT agents verses the PPD agents, countersnipers, watchers, post agents, the three levels of bubble protection, how does coordination work with the U.S. Air Force and the Marine’s HMX-1, how does communication work with their Joint Operations Center and the National Threat Assessment Center, how do they deal with White House staff requests from the president, and how do they manage risks and potential threats. There was a lot of stuff here, and the Secret Service is well known for being secretive about most of it. I would have no access to classified information (thank God), so it felt perfectly ethical to try to compile as much public information and history about the Secret Service as I could into one thriller with the simple purpose of showing readers just how incredibly difficult their job really is and just how remarkable these agents are who work so hard every day to keep the president safe.

Since the story was going to be really fast-paced, I thought I could write it in nine months. I grossly underestimated how much research I would need to do, and the book ended up taking me two-and-a-half years to complete. I read many books, articles, and websites about the Secret Service. There are also some good documentaries out there. But the most valuable information was from memoirs written by former agents, which really helped me understand their lives in the USSS. The best books were Joseph Petro’s Standing Next To History, Dan Emmett’s Within Arm’s Length, Jerry Parr’s In The Secret Service, and Colonel Ray L’Heureux’s Inside Marine One.

In addition to understanding the Secret Service, I needed to understand the antagonist. My first thought was to incorporate history about the fall of the Roman Empire. I began by reading Livy and Gibbon. For anyone who studies Roman history, it doesn’t take too long before you come across Rome’s greatest adversary: Hannibal Barca. The moment I started reading about this Carthaginian General, I lost interest in Rome and instead focused on his incredible life. I had heard of him in a broad historical sense, but I soon began to realize that this man was really something special in world history. The more specifics I learned about him, the more I was captivated. In particular, the two books most valuable to my research were Theodore Ayrault Dodge’s Hannibal (1889) and Richard Gabriel’s Hannibal (2011). I decided that Hannibal’s tactics were so ingenious that if I created a villain that knew every recorded detail about Hannibal’s military campaigns against Rome, then I would have a good background for a villain who would take on America the way Hannibal took on the Romans.

Finally, I focused on the setting. I knew from my research that it’s much more difficult to coordinate a president’s protection when on foreign soil. I liked that idea. I’ve always been in love with Europe (especially London, Paris, Berlin, and Prague). One day I read an article in the February 2011 issue of National Geographic Magazine titled Under Paris by Neil Shea, about the old Roman limestone quarries and the 180-mile tunnel system (including the catacombs) beneath Paris. I had no idea there was a massive tunnel system under Paris, and I was just as intrigued by this discovery as I was with the discovery of Hannibal Barca’s actions in history. As I researched more about these massive, cryptic tunnels filled with the bones of forgotten souls, all beneath one of the oldest and most beautiful cities in the world, I knew I had the final component for my thriller. Researching the Paris underground was tricky. I read everything about it that I could get my hands on, including specialized books I ordered from the gift shop at the Paris catacombs tour office, which I had shipped from Paris to my home in Denver. I also found a cool video on YouTube of someone who videotaped his self-guided tunnel tour with a helmet camera. This is what convinced me that I must see these tunnels for myself in order to write the book (I had previously been to Paris, but never into the tunnels). So I planned a research trip to Paris.

I was lucky to have two great travel companions for Paris: my sister, Casey, who was just finishing a dental residency at a hospital, and my old childhood friend, Paul Boyer, who was traveling the world and was at a surfing school in Portugal. The three of us met in Paris and spent a week soaking up the sights and enjoying the city, and we spent plenty of time exploring the public tour path of the Paris catacombs. The underground tunnel system is 180 plus miles with the remains of 6 million Parisian souls. Impressive numbers. The tour is 1.5 miles and passes the main catacomb section, known as The Empire of the Dead. We went early one morning and were first in line (which eventually wrapped around the city block), so that when the tour office opened we were the first into the catacombs. We raced through them as if we were characters in my book, with no one in front of us, and before long no one in sight behind us. It was an incredible experience, and invaluable for researching my story. I felt the temperature of the tunnels, the smell of the air, heard how sound echoed off the limestone (and didn’t echo off the walls of bones), and saw how the shadows moved and receded into the tunnel cavities. Filming is not allowed, but no one was around and I didn’t think the dead would mind if I broke a few rules in the spirit of living, so I captured a few moments of our adventure on video.

In the end, The Paris Protection ended up having more research go into its creation than any of my previous thrillers. This is partly because of how little I knew about its topics at inception, and partly because of how fascinated I became with Hannibal, the Paris catacombs, and the U.S. Secret Service—and how I could weave these elements into a thriller that captured the themes of patriotism and sacrifice for one’s country. In the words of Abraham Lincoln, “I do the very best I know how—the very best I can…” And I can only hope that my best is enough—enough to be worthy of these themes—and enough to thrill readers.

P.S. Click here to watch one of the short videos I took when inside the Paris catacombs.